Saucony has gotten back to their historic formula for the 11th version of the Kinvara, providing a lightweight, performance-oriented ride in a relatively flexible package. Despite changing the midsole construction to PWRRUN, the overall feel of this classic lightweight trainer remains the same. 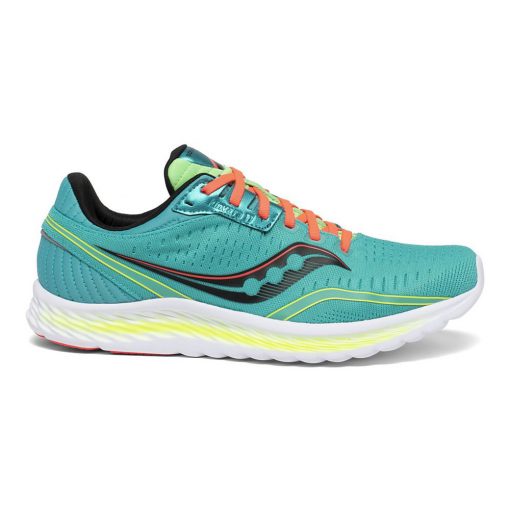 The Kinvara is Saucony’s long-running lightweight performance trainer, and doesn’t drastically change that formula in the 11.

Overall, the Kinvara is still on the big side. The toebox has plenty of room and the slightly wider platform means that runners of varying widths can wear it comfortably. The step-in fit and feel is great for a lightweight trainer.

The overall ride of the Kinvara 11 is fast and responsive. With the change to a new foam, Saucony has done a remarkable job of retaining the feel of classic Kinvaras. With a slightly more progressive cushioning system, the 11 maintains the responsive immediacy that Kinvara users are accustomed to in a very lightweight package. Recent advancements in the category, however, put the Kinvara in an interesting place. Flanked on one side by the wave of carbon fiber trainers such as the Endorphin Speed and the other by advancements in weight reduction of Boost-like foams (as seen in the Freedom 3), the Kinvara now finds itself as a throwback. Priced accordingly, the Kinvara will no doubt continue to find fans who want a no-fuss fast-feeling trainer at a good price.

The Kinvara has consistently has some amount of inherent stability, but the slightly narrower base and softer foam made the 8 and 9 a little less stable. The platform is back to being one of the more versatile neutral shoes with the changes to the 10 and 11. While it’s not going to be enough to replace the Guide or Omni, the Kinvara can work for a wide range of foot types.

Brooks and Saucony have similar design goals with the Launch vs Kinvara, and end up feeling similar on the road. The Launch has a much bigger drop (10mm to the Kinvara’s 4mm), but the overall height feels pretty similar. Next to each other, you do feel the difference in drops between the two. The underfoot feel of the foam is similar on each in terms of softness, but the Kinvara is not a little more progressive and provides you a little more immediate “give” before showing its springy nature. The Launch feels much more like a traditional trainer (whereas the Kinvara feels more race-inspired) – feeling more structured in the midsole and the upper. Even with the increased weight of the Kinvara in the past couple of generations, the Launch is still much heavier. It doesn’t immediately feel heavier on-foot, but certainly contributes to the Kinvara feeling more performance-based. Both shoes are pretty generous in the toebox, but the Kinvara has a little more room overall. The Kinvara has a little more inherent stability than the Launch, but neither is designed for runners who need stability for pronation.

One of the new wave of plate-based lightweight trainer/racers, the Endorphin Speed provides an interesting alternative to the Kinvara. Both are performance-first lightweight shoes that can be used either as trainers or racers, but the similarities end there. While the Kinvara approaches things from a traditional lightweight piece of foam strapped to a minimal upper perspective, the Endorphin speed uses a nylon plate, ultra lightweight foam, and rocker construction to actually increase your running efficiency. The price difference is significant ($110 for the Kinvara and $160 for the Endorphin speed), but so is the technology and feel. Until you try on one of the new plate/rocker/high stack height shoes, it’s hard to describe their feeling. Light, soft, and propelling you forward all at once is a unique experience that takes a few runs to get used to. The Kinvara has a very traditional feel in comparison, and when side-by-side feels like a traditional trainer.

Both shoes are low-drop Saucony neutral trainers and the most recent update to the Freedom has brought the two as close as they’ve ever been. Since the Freedom’s shift to PWRRUN midsole technology, the weight cost of the Freedom has been largely mitigated. The Freedom has also gained structure in the upper, making it feel more like a traditional trainer. In the Freedom 3 vs Kinvara 11, the big difference is the midsole feel. Heights in the forefoot and heel feel about the same, weight no longer is that big of an advantage for the Kinvara, and the uppers are now both flexible knits with a little bit of structure. So is the $50 difference in price worth it for the Freedom’s midsole? Maybe. It gives the Freedom both cushion and responsiveness, making it feel about as fast as the Kinvara yet suitable for any amount of daily training you would want to throw at it. Another big difference is the inherent stability found in the Kinvara is nowhere to be found in the Freedom, with the Freedom only being appropriate for truly neutral runners.

The Ghost and Kinvara are designed with different experiences in mind. While the Kinvara is a performance-based lightweight neutral trainer, the Ghost is more of a standard-weight, typical-feeling shoe. The Ghost has certainly become somewhat of a chameleon in terms of being pretty versatile, but with the Kinvara becoming firmer and faster feeling, you really do notice the difference when comparing them head to head. You can tell that the Ghost is heavier when you put them on. The Kinvara also is more versatile than the Ghost in terms of foot function, with the firmer midsole and wider platform.

The Kinvara and Ride are also designed with different experiences in mind. The Ride is Saucony’s standard-weight trainer while the Kinvara is a lighter, faster, more performance-based cousin. The two do share an overall ride experience, though. Both have a pretty standard trainer feel – not super flexible, not super soft, but providing what some would call “support” that you don’t get in some other brands’ offerings.