The third generation of the Wave Sky brought a huge change for Mizuno in removing the wave plate! The Wave Sky 4 WaveKnit keeps the same midsole and outsole from the 3 while creating an entirely new upper.

In a big move for Mizuno, last year’s Sky had no plastic wave plate in the midsole. While the plate was the trademark mechanism for Mizuno, it was preventing their designers from competing with some of the other max-cushion shoes from other brands. The Sky 4 doesn’t change anything about the midsole or outsole, but Mizuno has gone to a little more traditional structured upper which does alter the overall feel of the shoe. 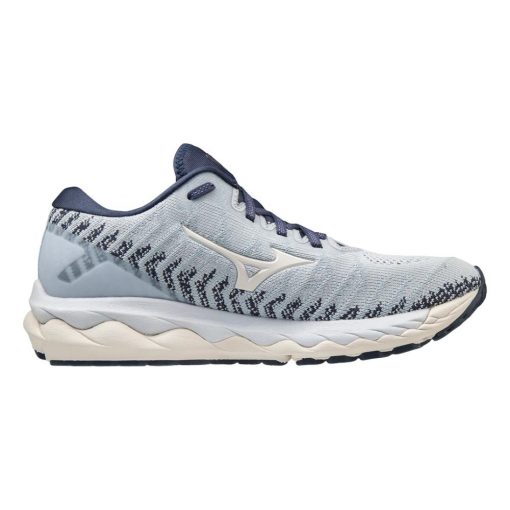 The revisions to the Sky 4 now provide a more standard fit, but the knit upper does have flexibility to accommodate various foot shapes.  It remains pretty true-to-size in terms of length and overall is pretty wide throughout the shoe, but the toebox is pretty shallow.  The new FlyKnit upper is forgiving, but if you’ve had depth issues in the toebox you might have to look elsewhere. The most notable fit quirk of the shoe is the heel counter. Everything from the laces back is really high, so runners with a low or prominent ankle bones are going to have a hard time with the new design.

The Sky continues to provide Mizuno’s softest, most cushioned ride.  It also has a really nice, plush, premium step-in feel which continues throughout the run. As soft as pretty much any traditional shoe on the wall, the removal of the wave plate has allowed Mizuno to increase the softness of the Sky, but it’s not to the level of the Hoka Bondi yet. Mizuno also has stuck to a pretty traditional foam construction, so the softness does come at the cost of weight. The combination of softness and overall weight, the Sky 4 feels pretty substantial on your foot. About as soft as a Nimbus, Glycerin, or Vomero – the Sky isn’t the over-the-top plush ride that you would get out of a Hoka, but it rivals pretty much any non-Hoka on the market.

In their current versions (Wave Sky 4 vWaveKnit vs Nimbus 22). Both the Sky and Nimbus are designed to provide the highest level of perceived cushion. With the removal of the wave plate, the Sky is considerably softer than the Nimbus. With the recent improvements to the ride and transition of the Nimbus, it feels a little quicker and more playful. That feeling runs from the ride all the way to the upper feel with the Sky feeling like a lot more shoe. On the scale, the two have pretty similar weights, and on-foot they feel about the same. You’ve got a little more room in the Nimbus, both width and depth. Neither are going to provide any significant amount of stability.

The Sky 4 and Rider 24 share a similar feel, with the Sky basically being a bulked-up version of the Rider. The Sky feels softer, bulkier, bigger, and much more plush. It’s a little higher, has much more in the heel (both underfoot and around the heel counter).  You feel the extra ounce of the Sky because of the bulkier feel.  Mizuno is back to providing truly different experiences in each shoe, with the Sky for runners who want a protective, soft, plush ride and the Rider for those looking for something a little lighter and more playful. Neither are designed to provide any amount of guidance and the differences in inherent stability are negligible between the two.

The new Sky now rivals the softness and smooth transition of the Glycerin. Riding a little higher than the Glycerin, the Sky now feels like more shoe – more protective, more cushioned, and plusher. While the Sky is a little more substantial, it also is a little less bouncy and playful. Step-in feel is plusher in the Glycerin. Actual weight on the scale is about the same, and the on-foot feel is pretty similar. You have a little more width in the Glycerin and much more depth in the toebox. The Glycerin’s knit upper is also much more flexible and giving. Neither shoe is going to have any inherent stability, so both are only good options for neutral runners.

Mizuno has recently been amping up the cushion throughout their lineup, and the new Sky delivers on the maximum-cushion design goal. With the recent update to each shoe, the Sky feels lower and maybe a little softer – but it is just a slightly different type of cushion.  The Clifton also has the rocker design that the Mizuno lacks. You really feel the considerable weight difference between the shoes on-foot, with the Clifton being significantly lighter. Width is about the same overall on both shoes, with the Clifton having a much more generous toebox. The Sky lacks the inherent stability that the Clifton provides, so the Clifton is going to be suitable for a little broader audience of runners and walkers.