A new shoe from Brooks! Capitalizing on the interest and science of new foam technologies, Brooks has just released the Hyperion Tempo. A very lightweight trainer designed mostly for tempos and racing, the Hyperion Tempo uses Brooks’ newest DNA Flash foam in a minimal package to create a unique new shoe.

While the lightweight training category has recently taken a back seat to other running shoe categories in terms of both customer and company interest recently, the development of new foam and plate technologies has reset the category and breathed new life into what was a pretty stale segment. 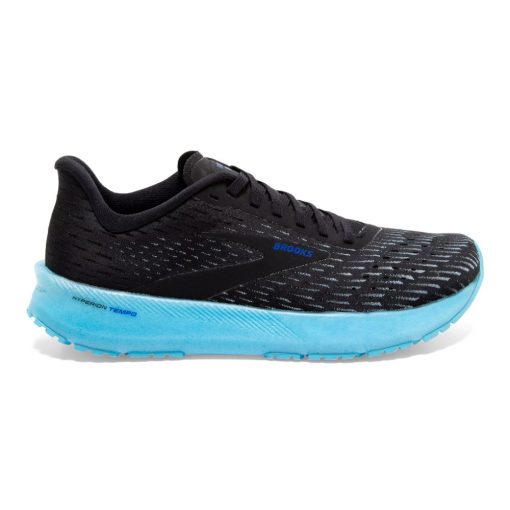 Overall, the Hyperion Tempo is standard performance trainer: designed to be a little snugger, minimal, and streamlined. The upper provides some stretch, but not as much as some of the Nike knits. It’s lighter weight, though, and for the intended use on faster days or races, a nice way to accommodate a variety of foot shapes.

The overall ride of the Hyperion Tempo is fast and responsive. Despite the use of a high tech infused foam, Brooks has done a remarkable job of retaining the feel of classic lightweight trainers. You get the immediate road feel on each step and the foam feels like it’s barely there at times. Recent advancements in the category, however, put the Hyperion Tempo in an interesting place. Flanked on one side by the wave of carbon fiber trainers such as the Endorphin Speed and the other by advancements in weight reduction of Boost-like foams (as seen in the Freedom 3), the Tempo is in the “throwback” category with the DS Trainer and Kinvara.

Designed as a really lightweight trainer and racing flat, the Hyperion Tempo isn’t really intended to provide any support for pronation.

While they share a name, there are some major differences between the Hyperion Tempo and Elite. The Elite is designed as a racing shoe with a very limited lifespan – 1-2 marathons. It uses Brooks’ new DNA Zero foam in conjunction with a carbon plate to provide the maximum amount of energy return in a Brooks shoe. It feels much more in line with the new wave of exotic race shoes we’ve seen from most major brands. The Tempo shares almost none of that technology and feels much more like a traditional racing flat. It does use a new blend of DNA Flash foam, but the Flash simply lacks the unique blend of softness and energy return that’s now common in exotic racing shoes. The tradeoff, though, is that you can use the Tempo as an everyday trainer/racer and expect a pretty normal lifespan from it.

The Ghost and Hyperion Tempo are designed with different experiences in mind. While the Hyperion Tempo is a performance-based lightweight neutral trainer, the Ghost is a standard-weight, typical-feeling shoe. The Ghost has certainly become somewhat of a chameleon in terms of being pretty versatile, but the Tempo is a different animal. You can tell that the Ghost is heavier when you put them on, and that is emphasized by their running characteristics.

One of the new wave of plate-based lightweight trainer/racers, the Endorphin Speed provides an interesting alternative to the Hyperion Tempo. Both are performance-first lightweight shoes that can be used either as trainers or racers, but the similarities end there. While the Hyperion Tempo approaches things from a traditional lightweight piece of foam strapped to a minimal upper perspective, the Endorphin speed uses a nylon plate, ultra lightweight foam, and rocker construction to actually increase your running efficiency. Until you try on one of the new plate/rocker/high stack height shoes, it’s hard to describe their feeling. Light, soft, and propelling you forward all at once is a unique experience that takes a few runs to get used to. The Hyperion Tempo has a very traditional feel in comparison, and when side-by-side with the Tempo feels like a traditional trainer. Some runners might prefer that connection with the road that the Tempo provides, while others may enjoy the plush nature of the Endorphin Speed.