Mizuno continues to update (and confuse) their neutral shoe lineup with the Wave Rider 24 and the Rider 24 WaveKnit. Gone is the R1/2/3 naming scheme and Mizuno gets a little closer to a truthful representation of what the shoes are (identical except for the upper). The shoes do fit and feel slightly different, but they are based on the same architecture and share a midsole and outsole, so the overall feel and function is nearly identical. 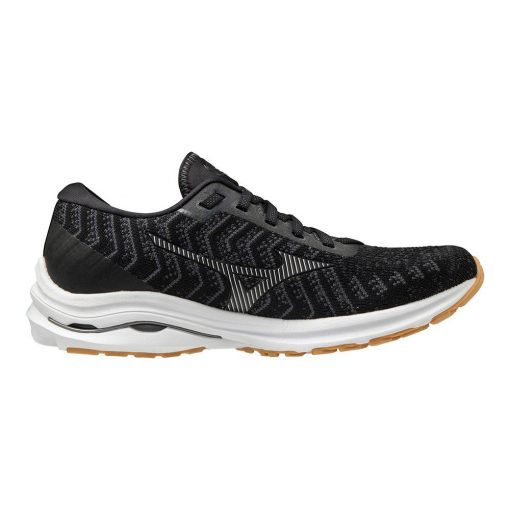 The fit of the Rider WaveKnit 24/Wave Rider 24 is pretty standard throughout the shoe. You don’t get a generously tall and wide toebox in the WaveKnit, but the upper is flexible enough that runners with feet of various shapes should appreciate the knit design. The knit isn’t as tight as Nike’s Flyknit, but it’s tighter than Brooks’ knit as found in the Levitate. Length is standard – no need to go up or down to your usual running shoe size. Runners who need a wider shoe may want to look at other options, though, as both versions are on the narrow side of the spectrum.

The Wave Rider/WaveKnit has gone back toward its roots a bit. While the most recent 3-4 generations of Rider have gotten continuously softer, Mizuno has gone a bit bak to Mizuno’s (deserved and somewhat desired) reputation as being firmer and more responsive. That gradual softening had gotten the Rider away from its original performance trainer feel a little bit and put it more directly in competition with standard weight neutral trainers such as the Pegasus, Ghost, and Cumulus. With this most recent version, however, the Rider gives you a little more feel for the road and feels firmer, faster, and lower. Unlike the previous few versions of the Rider- the shoe no longer has a really “soft” feel. One thing about the feel that must be noted is that in the early 24s that we have in-store, there is a very obvious drop-off right as the wave plate ends. Whether this is intentional to keep the forefoot a little livelier or a manufacturing error is yet to be seen, but because the WaveKnit version doesn’t seem to have the same notch, it seems like it may be corrected in other batches of the shoe.

The Rider 24 falls squarely into the standard-weight neutral trainer category.  While great for neutral runners, it’s not going to provide any guidance to prevent pronation. With the change in foam, it may have even become a little less stable.

The Mizuno Rider 24 features a firmer lower, and more responsive ride than the Ghost 13. While the some precious Wave Riders had a similar plushness to the Ghost in terms of the ride, the evolution of the WaveKnit/Rider and Ghost have resulted in the Rider being much firmer once again. The Ghost is also much more consistent in its cushion, with the Rider having a noticeable dropoff at the end of the wave plate. Fit is pretty similar between the shoes, with the less plush upper of the Rider maybe giving it a little more room. The weight of each shoe is very similar, and you really can’t tell a difference on-foot. Neither provides any significant amount of stability.

The Pegasus is much softer, lower, and more flexible than the new Rider. The Pegasus has much more limited room in terms of width and depth in the toebox. While The Rider is a little more generous in the toebox, the knit on the Pegasus is much more stretchy and giving. Weights are very similar, but the R2 feels like much more shoe even if it is about the same weight.  You feel like you’re on top of the Rider vs sitting lower in the Pegasus. The amount of guidance in each shoe is minimal, and both are great options for neutral runners.

The Sky 4 and Rider 24 share a similar feel, with the Sky basically being a bulked-up version of the Rider. The Sky feels softer, bulkier, bigger, and much more plush. It’s a little higher, has much more in the heel (both underfoot and around the heel counter).  You feel the extra ounce of the Sky because of the bulkier feel.  Mizuno is back to providing truly different experiences in each shoe, with the Sky for runners who want a protective, soft, plush ride and the Rider for those looking for something a little lighter and more playful. Neither are designed to provide any amount of guidance and the differences in inherent stability are negligible between the two.