After no major changes for the Brooks Glycerin in its 17th version, the Glycerin 18 is pretty big redesign of the shoe. Let’s see how the new one fits, feels, and functions!

The new Glycerin continues to be (in theory) Brooks’ maximum-cushion neutral trainer. The 18 follows in the long line of soft, pillowly Glycerins but Brooks seems to have gone in a little lighter/lower/firmer direction. 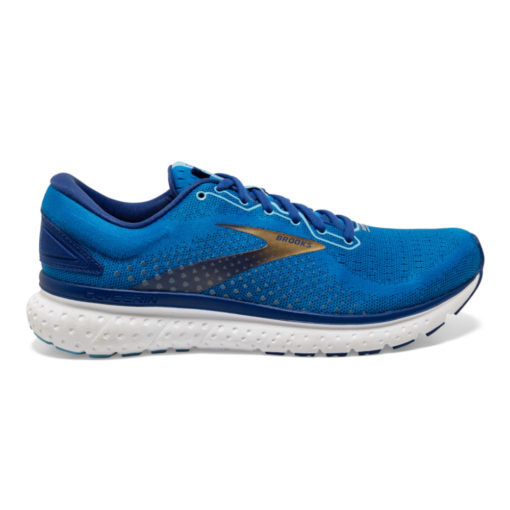 With the new mesh upper and slightly less plush internal bootie, the Glycerin has a pretty standard fit throughout, and the flexibility of the mesh should be forgiving enough that runners with slightly wider feet should be able to use it. Overall, the Glycerin 18 is still pretty middle of the road in overall width. The toebox is now back  to a pretty standard size after tightening up quite a bit in the last few versions.

In the Glycerin 18, Brooks has maintained the lowered feel of the Glycerin 17 but for some reason the plush nature of the DNA Loft foam that was found in the 17 is missing. The transition is still great with DNA Loft, giving the Glycerin an edge over some of the max cushion alternatives in terms of being able to use it for faster runs. Lighter and more playful than the its max-cushion competitors, Brooks has updated the Glycerin to compete with a wide range of neutral shoes but no longer can be considered a true “max cushion” shoe. The Glycerin 16 and 17 did have some issues with the very soft foam making it a difficult for Brooks to produce consistent durometers. Different batches of the shoes would feel considerably softer than others, and it could be that Brooks has gone to a more consistent foam.

With a soft, less structured midsole, the Glycerin 18 doesn’t show any major signs of the inherent stability that some of the past Glycerins have had. While great for neutral runners, it’s not going to provide any guidance to prevent pronation.

In their newest versions (Glycerin 18 vs Ghost 13), both shoes use Brooks’ DNA Loft foam and mesh upper. The experience of the two shoes is actually pretty similar, with the Glycerin feeling not feeling much more “luxurious”. The upper and midsole are a little softer than the Ghost, but not by much. You do get a little more volume in the shoe the Glycerin, and the upper seems to be a little more stretchy. Neither shoe provides significant guidance for runners with more flexible foot strikes, but we’ve seen that both have a little bit of inherent stability.

Despite having a similar overall conceptual goal of providing a maximum amount of perceived cushion, the Glycerin and Nimbus have remarkably different on-foot feels. While the drop is 10mm on both shoes, the experience of the Glycerin is much more playful and springy while providing almost the same amount of cushion. The Glycerin feels much lower in the heel and the heel feels much more flexible, while the Nimbus’ heel feels a lot more stable/platform-like. In terms of weight, each are similar with the Glycerin feeling much lighter thanks to the springy midsole and flexible upper. Widths are about the same, with the Nimbus having a little more toebox room. The upper mesh in the Glycerin is much more flexible and forgiving. As each is designed as purely neutral trainers, guidance for each shoe is minimal.

The new Glycerin, especially with its firmer foam and lower feel, is now pretty far from the softness and smooth rocker transition of the Bondi. Obviously the Bondi is much higher overall and remains slightly softer than the Glycerin. The Glycerin is lighter and less substantial, with only slightly less of a “plush” upper feel. The Bondi does have some inherent stability due to its cradling midsole while the softer foam of the new Glycerin pretty much removes any inherent stability that it had in the previous couple of versions. The overall widths of the shoes are pretty similar, with the Bondi having much more depth and width in the toebox.