A mainstay in the running industry, the GEL-Cumulus 22 is the newest version of ASICS’ reliable standard-weight neutral trainer. After a minimal changes to the 21, the 22 gets some significant upgrades that really improve the fit and feel of the shoe.

ASICS has made some nice upgrades to the upper, outsole, and midsole that have followed ASICS’ overall transformation towards a softer, smother ride. 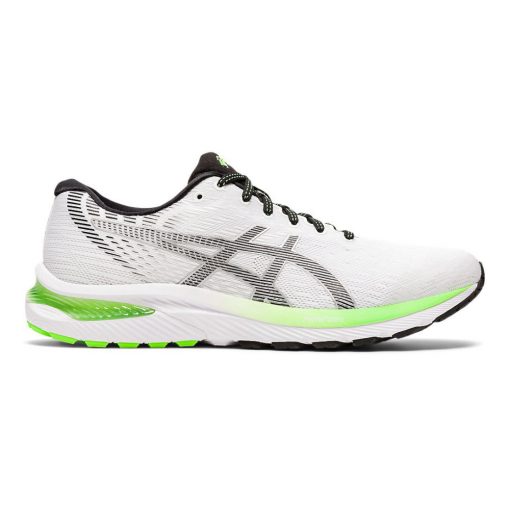 ASICS had gotten back to a better fit with the GEL-Cumulus 20 and 21, but have taken is to yet another level with the 22. While the 22 may have a slightly smaller toebox, it is much more accommodating overall thanks to a new upper that seems more forgiving. The GEL-Cumulus 22 is running pretty true-to-size while providing a very accommodating fit throughout the shoe. One defining characteristic of the Cumulus is the very structured heel. It is still one of the most firm heel counter on the market.

The GEL-Cumulus 22 has really improved on the traditional standard-weight neutral feel that runners have come to expect in a Cumulus. While the past few versions have been less flexible than some of its competitors, the 22 now is right on par with the combination of soft/responsive/lightweight characteristics.  This version of the FlyteFoam midsole gives it a little less responsive feel but certainly more cushion than some previous Cumulus’. Coming from the past few versions of the Cumulus, it’s amazing how smooth the 22’s transition is. While ASICS has been critically panned for their slappy nature for a few years, you really do get a smooth ride with the 22. The Cumulus 22 remains right in the middle of the spectrum in terms of ride (halfway between the firmness of the New Balance Zante and the plushness of a Hoka Bondi).

As a standard weight neutral shoe, the ASICS GEL-Cumulus 22 is one of the classic neutral trainers. It provides very little inherent stability and will allow the foot to be flexible. While great for neutral runners, it’s not going to provide any guidance to prevent pronation.

Given how different the past few versions have felt, in their current versions (Brooks Ghost 13 vs ASICS GEL-Cumulus 22) the shoes feel remarkably similar. The Ghost still has an overall softer feel, both in the upper plushness and in terms of midsole/ride, but the difference is very narrow. The transition feels very similar between the two, with the Ghost maybe feeling a little bit more flexible. The GEL-Cumulus is more structured in the upper and feels like a more solid platform. With the Ghost 13, everything just rolls a little bit easier in every direction. Each runner might have their own opinions on which feel calls to them. Weight is almost identical for each shoe and neither feels significantly heavier than the other on-foot. The Ghost is a little wider than the Cumulus, with a much more flexible upper with fewer overlays. The flexible upper allows even more room for both shoe width and toebox volume. Neither is designed to have any stability and we haven’t really observed much inherent stability for either.

While the past few versions have been surprisingly similar in feel, with the recent changes to each, the Cumulus is back to feeling softer and plusher. While the step-in feel is similar, once you take a few steps the new FlyteFoam formula really shows its benefits of being both soft and responsive.  Comparing the two also shows the liabilities of the Wave plate, with the Rider susceptible to having a noticeable notch at the end of the plate. The Wave Rider is wider than the Cumulus, with about the same amount of width and depth in the toebox. Weight is very similar for both shoes, and the Rider feels a little higher. The amount of guidance in each shoe is minimal, and both are great options for neutral runners.

Two of the titans of neutral trainers! In their current forms, the two take very different approaches. The GEL-Cumulus 22 maintains its structured upper and midsole while the Zoom Pegasus 37 is a really flexible, contoured trainer. While both weigh about the same amount, the Pegasus’ super soft midsole and complete lack of structure make it feel much like a sock that has a lot of cushion. Conversely, the Cumulus feels more substantive and supportive of your foot. The Pegasus is softer than the Cumulus, and has a significant lack of any type of support or structure to the upper. Neither are designed to provide any amount of guidance and the differences in inherent stability are negligible between the two. The fit of the two are pretty different, with the Cumulus having a pretty traditional fit while the Pegasus is really contoured yet flexible. The Pegasus is small – at least half a size, but the flexible nature of the upper provides a lot of room for your foot to flex. We have had some fit issues with slipping in the Pegasus.