After a radical change for the Pegasus 35, the 36 just gets a minor upper refresh with no changes to the midsole or outsole. The soft, low feel of the 35 is back with a slightly better upper fit. 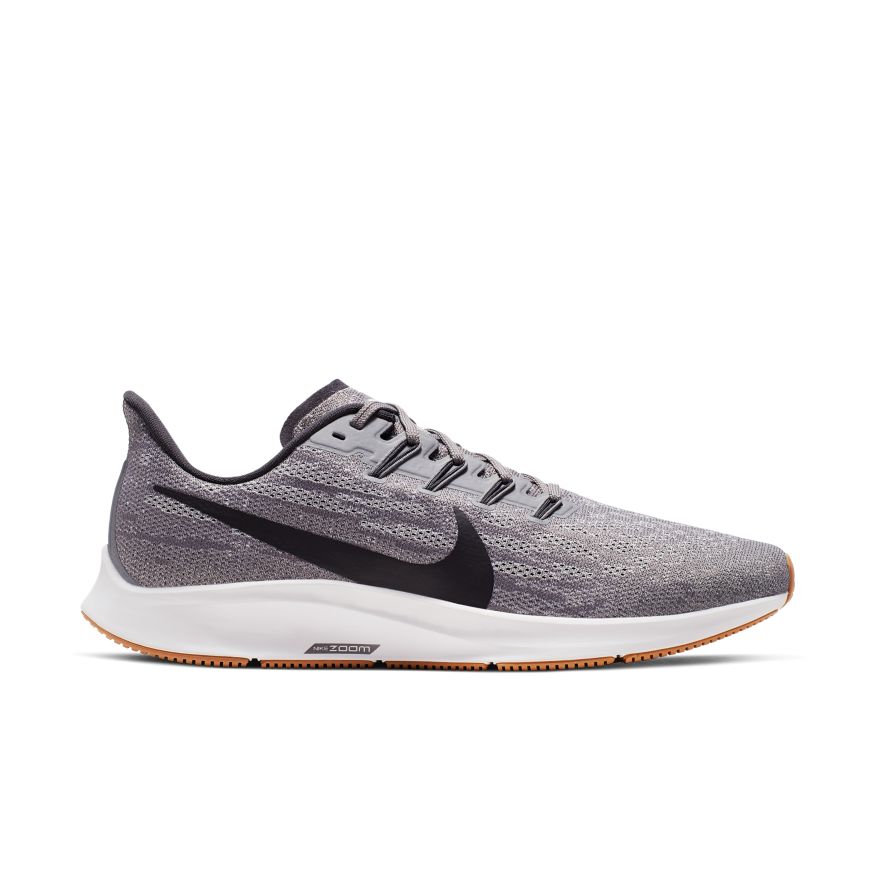 The flyknit upper remains tight. While the tongue has lost some of its bulk, the shallow and narrow toebox and flyknit material greet your toes immediately when you put the shoes on. The length of the 36 is pretty true-to-size in terms of running shoes, so Nike just is providing a pretty snug fit overall. Runners and walkers needing room in the toebox, especially depth, will need to look elsewhere. The flyknit upper is forgiving, and the updated flyknit upper now provides a really wide range of flexibility in terms of width. The Pegasus 36 continues to provide a prominent arch and heel cup, with the overall fit of the shoe feeling really contoured to your foot.

The new Pegasus 36 uses the same Zoom Air and EVA foam as previous models in the Pegasus line, and the full-length Zoom Air unit makes the shoe feel light and fast. Comfortable for easy runs as well as for faster tempos or workouts, the Pegasus has a pretty wide range of applications. It’s not going to feel as performance-oriented as the new Pegasus Turbo 2, but it is fast enough to serve multiple purposes for most runners. Overall, the Pegasus 35 is a softer performance-oriented trainer. Lighter and more playful than the Vomero, it actually feels similar to the Ghost in terms of under-foot feel. The flyknit upper helps the transition and flexibility of the shoe and creates a soft step-in feel. But, that step-in feel is dominated by the constrictive nature of the toebox.

As THE standard weight neutral shoe, the Nike Pegasus 36 the longest-running classic neutral trainer. From what we’ve seen from the Pegasus 35, the 36 is going to allow your foor to pretty much function as it pleases, so while great for neutral runners, it’s not going to provide any guidance to prevent pronation.

With the newest updates of each shoe, the Pegasus remains consistent with Nike’s attempt to make it more of a faster feeling shoe. The Pegasus is lighter and less substantial, with less of a “plush” feel, but not by much. The Vomero’s recent move to more of a slim, performance-feeling shoe has left little room between the two. To Nike’s credit, the Vomero really feels like a slightly beefed-up version of the Pegasus. The two feel remarkably similar, with there just being a little more to the Vomero. Neither shoe provides any noticeable guidance for runners who pronate. The overall widths of the shoes are pretty similar, with the Vomero having much more depth and width in the toebox.

Despite sharing the same name, the experience in the Pegasus and Pegasus Turbo are remarkably different. The ZoomX foam makes an enormous difference in the overall feel. Compared to the ZoomX Turbo, the Pegasus 36 feels stiffer, heavier, and kinda lumpy. The Turbo does feel a little higher than the 36, but the energy return of the ZoomX foam still allows for a fast-feeling ride.  The difference in weight on the scale is pretty amazing (~2 oz in a men’s 11,) and you actually do feel that difference while running. Neither are designed to provide any amount of guidance and the differences in inherent stability are negligible between the two.