The new Saucony Guide ISO 2! With some midsole, outsole, and upper changes, the Guide ISO 2 feels and fits different than the original Guide ISO

Saucony claims that the upper is the main change in the ISO 2, but the collection of changes that they’ve made end up altering aspects of the fit, feel, and even function of the Guide. Here are the main changes:

The new Guide ISO 2 becomes a pretty standard fit, with the more flexible mesh upper possibly providing a little room for standard-width feet. It is narrower/tighter than the old Guide ISO, but still is about average overall. The toe box is pretty shallow and tapered, so you no longer have plenty of wiggle room as you did in the old Guide ISO.

Saucony continues the trend that many shoe manufacturers have been on recently, making the new Guide ISO 2 a little more performance-feeling. It is somewhat contradictory to their marketing of the Guide feeling soft, as it no longer provides such a consistent level of perceived cushion as it might have in the past. It does continue to be a middle of the road-cushioned trainer that has a moderate amount of guidance to prevent pronation.

With the narrowing of the platform and the softer guidance foam in the midsole, the Guide ISO 2 has noticeably less guidance than previous versions of the Guide. It still does provide some amount of support, but it now becomes one of the mildest supportive options on the wall.

The big difference between the Saucony Guide and Ride is that the Guide is designed as a guidance (or “stability”) shoe while the Ride is their neutral shoe. Saucony has designed the Guide to be more supportive than the Ride while still featuring the same level of cushion. In their current versions, each shoe feels and functions consistent to those design specifications, but the Guide ISO 2 is now pretty minimal in terms of actual guidance. The Ride is a little bit softer and provides a little less support, but there is an increasing amount of similarity between the shoes as the Guide has become more firm and less stable. The Ride is lighter, but the shoes feel about the same on-foot.

The Guide and the Adrenaline both are designed to provide a moderate amount of guidance in a cushioned, standard-weight package. With the Guide becoming substantially less stable and a little firmer, the Adrenaline now feels softer and is certainly more stable than the Guide. The Adrenaline is higher than the Guide, and has a greater drop – which you feel when comparing them on-foot. Their weight is almost identical, and they feel very similar.  The Guide is narrower than the Adrenaline – both in the toebox and throughout the shoe, and it has a deeper toebox.

In their current versions, the shoes have a pretty different feel. The 2000 has an overall firmer and lower feel, both in the upper and in terms of midsole/ride. The Guide has less room in the toebox and is a little narrower overall, with the 2000 being maybe a half size longer. Each weighs almost the same, and there’s no perceptible difference between them on-foot. The 2000, while having lost a little guidance in recent versions, is still more supportive than the new Guide ISO 2. 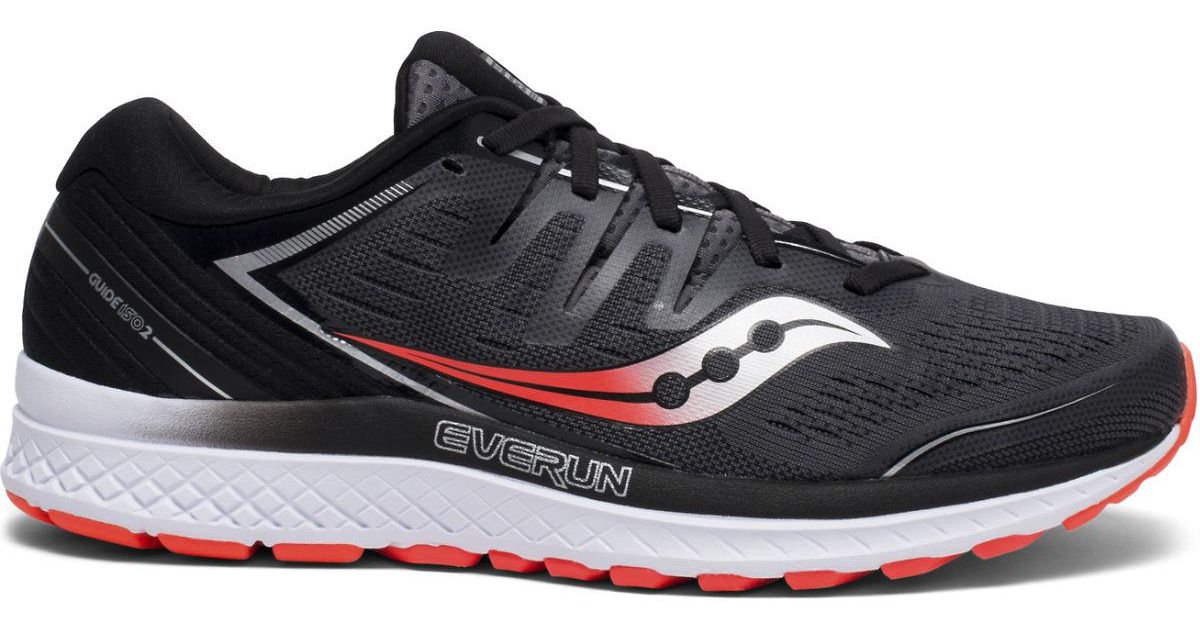