A new shoe from ASICS – The EvoRide!

Using rocker technology and ASICS’ latest FlyteFoam formula, the EvoRide is a new lightweight trainer from ASICS that blends a responsive ride with a pronounced rocker feel. The upper feels pretty traditional, creating a shoe that you can use for everything from longs runs to races. 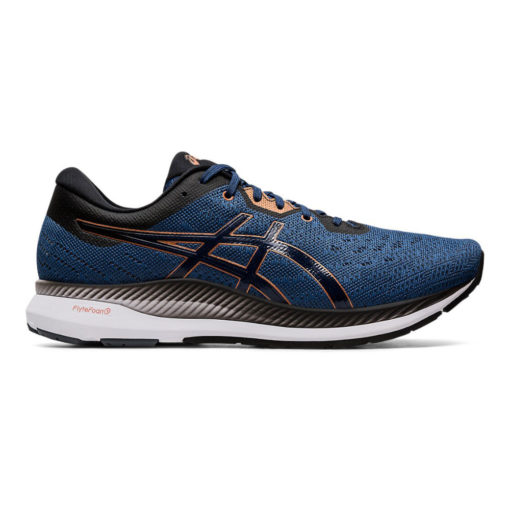 Overall, the EvoRide fits like you would expect a modern lightweight training shoe to fit. With a nice knit mesh upper with minimal overlays, it is pretty standard in both overall length and width. The only real defining characteristic of the EvoRide in terms of fit is the toebox – ASICS has provided a surprising amount of room both in terms of height and depth.

The EvoRide has a pretty unique feel, especially for the brand. The rocker element is immediately noticeable when you step into the shoe. While it’s not as pronounced as in the MetaRide, you feel as much roll as you would in a HOKA or with the Nike Zoom Fly. The rocker feel really does give you a lean forward in each step, which can take a little getting used to if you’ve been in a traditional trainer. The EvoRide isn’t as high as most of the HOKA’s, though, so you you’re a little more connected to the ground and have a better feel for the road and your toes. In terms of cushion, it’s on the firm end of the spectrum. In HOKA terms, about as soft as the Rincon. It’s light, though, and the rocker not only gives you a really smooth transition through each step but also adds a little bit of give to the firmer foam.

The EvoRide is designed as a a neutral trainer and we haven’t really seen anything to indicate that is has much inherent stability.

Designed on the same basic principles, ASICS has produced the GlideRide to be the workhorse trainer with more cushion, more rock, and an overall more plush feel. The EvoRide functions as the faster, more connected to the road, slightly more traditional lightweight trainer.

Both designed to be lightweight trainers from ASICS, the two take pretty different approaches to the end goal. The NovaBlast uses copious amounts of the new version of ASICS’ bounciest foam to provide a trampoline-like bounce with each step. It’s light enough that you can still do faster runs, but you don’t really get that feel-the-road sensation that you might from lower trainers. The EvoRide is firmer, lower, and has a pretty big rocker element to provide a much different lightweight trainer experience.

The Pegasus is designed as a standard-weight trainer while the EvoRide is meant to me much lighter and faster-feeling. Differences about from when you put on the shoe – with the EvoRide having a traditional mesh knit upper and the Pegasus really having a form-fitting knit that fits tight but has very little structure. The Pegasus is lower, softer, and far more flexible. It lacks the rocker element that’s pretty prominent in the EvoRide. Weight-wise, both shoes feel almost identical on-foot.

With very similar design goals, the EvoRide and Rincon end up feeling pretty similar to each other. Each feature a rocker design with a lightweight, pretty firm foam. The EvoRide has a slightly more plush step-in feel, and that plushness extends to the experience actually running in the shoe. Different runners would likely disagree on which feels softer as the cushion is slightly different in each shoe. The EvoRide has a little more progressive softness, with an initially soft feel quickly fading into a more firm ride. The Rincon is more on/off, with a relatively firm and responsive ride throughout the step. The Rincon is wider through the heel and midfoot, but the toebox of the EvoRide is both wider and deeper.