New Balance has made some slight changes with the 860 v9 – How does New Balance’s latest version of the 860 stack up to previous versions and its competitors? Let’s find out!

There are a few changes with the new 860 v9- While New Balance has stuck to the formula that has made the 860 their go-to stability shoe, the update tweaks the cushion and fit enough that it might be worth trying them on before re-ordering.

The 860 v9 fits pretty standard across the board. It’s not as forgiving as the previous v8 and has about average toebox room. It is true-to-size length-wise – maybe very slightly big, but nothing to require a switch from your normal size. It no longer has the overall boot-like structure to the shoe that previous 860s have had.

New Balance has really improved the ride of their classic guidance shoe – it’s a cushioned yet not cloud-like ride. The ride of the 860 v9 is now pretty soft, with the improved flexibility keeping things responsive. Previous 860 customers might feel like this is a bit of a change from their beloved shoe, and it does feel different. The support that runners have felt in terms of a flat, boot-like ride is gone in favor of a more traditional landing and then transition. We’re thinking that these changes are going to draw in some new fans.

The New Balance 860 is one of the original stability shoes. While the new version feels less stable in the heel due to an improved landing and transition, it doesn’t seem to have any less guidance than previous versions. It seems that the 860 remains as stable as it has traditionally been.

The Wave Inspire 14 and the 860 v9 feel similar in terms of softness, with the Inspire feeling a little softer even with the increased softness of the 860. The 860 still has more guidance than the Inspire 14, but you pay for that guidance in weight. Despite being considerably heavier than the Inspire, the 860 no longer feels as heavy as it is. With the better transition on the 860 v9, they feel about the same weight on-foot. The Inspire 14 is a little narrower than the 860 throughout, but with the change to make the 860 a little narrower they are now pretty close.

New Balance 860 vs Saucony Omni ISO:
The Omni ISO actually feels a lot like the old 860 v8 in terms of just being a lot of structured shoe. The new 860’s softer, more streamlined feel makes it feel much lighter, faster, ad lower than the current Omni. The Omni has much more room in the toebox, and is a little wider overall. They each weight almost the same, with the 860 feeling a little lighter on-foot thanks to the improved transition. Both have a significant amount of guidance.

The 860 is New Balance’s flagship stability shoe while the 880 is their classic standard-weight trainer. Each are designed for a very different runner, with the 880 appropriate for neutral or supinating runners and the 860 designed for those with some flexibility in their gate.

Check them out here! 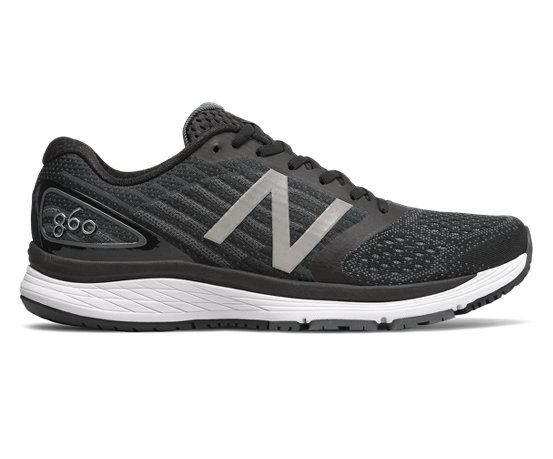