New Balance has created a unique new shoe with the Beacon. Like Hoka Clifton or Nike React, the Beacon is New Balance’s experiment into how soft and light their Fresh Foam can get. The result is a pretty amazing shoe. Comfortable doing everything from speedwork to long runs, the Beacon is a unique mixture of lightness and softness that doesn’t really have a direct comparison in the market. Between the overall height and drop of a Hoka Clifton and Altra Escalante, the Beacon has a 6mm drop on 20/26 stack heights, putting it in standard trainer territory.

It doesn’t feel like a standard trainer, however. The immediate feeling when putting on the Beacons is overall softness. You also notice how light the Beacons are, and those initial reactions are confirmed all the way through the run. Light both on the scale and your feet, eliminating almost all blown rubber from the sole and relying on a textured pattern of their most durable Fresh Foam compound for the outsole has left New Balance with a daily trainer that consistently feels light and soft.

Using a now-ubiquitous knit upper with minimal overlays, the Beacon is pretty sung in the heel and through the arch. It provides a roomy toebox, and the flexible knit upper has plenty of give to accommodate a moderate amount of wiggle room for uniquely shaped feet. Length might be on the slightly shorter side of things, but no need to deviate from your normal running shoe size.

It’s actually pretty hard to describe the Beacon’s overall feel. It’s lighter than most standard trainers, yet provides a softness that rivals some companies’ more cushioned offerings. Designed as a lightweight, do-anything neutral trainer – it has a great transition that really takes advantage of its lightweight nature. Unlike other New Balance Fresh Foam shoes, the lack of a outsole gives it a much springier and playful feel.

Our early testing is indicating that unlike the Hokas that it might be naturally compared to, it doesn’t seem to have any inherent guidance. Instead of a cradling feeling with the Bondi or Clifton, the Beacon places you much more on top of the midsole. Designed and functioning as a purely neutral shoe, the Beacon is a great option for neutral runners but not those needing/wanting support for any flexibility in their gate.

Both the Hoka Clifton and New Balance Beacon are lightweight trainers designed to make the most of a pretty thick piece of foam underfoot and have nothing else in your way.  You feel much lower and a little lighter in the Beacon, with the Clifton having a much higher overall stack height. The Beacon is a little more springy, and you feel like you’re not sinking into the shoe as much as you are in the Clifton. Compared to the Beacon, the Clifton almost feels a little sloppy in the upper, but that’s more of a testament to how sleek New Balance has made the Beacon. You’re going to get much more inherent stability in the Clifton, so runners with some flexibility in their foot would better with the Clifton.

Now that the Pegasus has evolved a little bit to be a little more focused on being a performance-based neutral trainer, the concept of these shoes is pretty similar. The Beacon takes the concept a little farther than the Pegasus, feeling just a little lower, a little lighter, while still having a similar amount of cushion. You just want to run a little faster in the Beacon. The Pegasus does hug your foot better, but that might actually be a negative for runners who prefer some wiggle room in the toebox. Neither offers any significant guidance for runners who pronate.

Conceptually similar, the Kinvara and Beacon feel very different in execution. With New Balance’s new blend of Fresh Foam, the Beacon is just softer without sacrificing the performance feel. The transition in the Beacon is way better, with the Kinvara feeling flat in comparison. The Kinvara does feel a touch lower, but not any lighter. A little wider than the Beacon throughout the foot, the Kinvara might provide a little more room for slightly wider feet. Toebox room is similar. Both are pretty much pure neutral trainers, with the Kinvara being a little more versatile if pushed with a little pronation (but probably not the best option overall in that case).

It’s pretty amazing that the same company makes both of these shoes concurrently – much less that they’re made out of the same base material. While each are pretty lightweight and flexible, the Zante just feels so much harder than the Beacon that it’s hard to put into words. The Zante is lower than the Beacon and provides a little of width for wider feet, so runners getting the Zante for light cross training might still look to its low profile and casual looks. The Zante also has a little inherent stability because of its low overall nature, but neither are good options for runners who are looking for stability in their shoes. 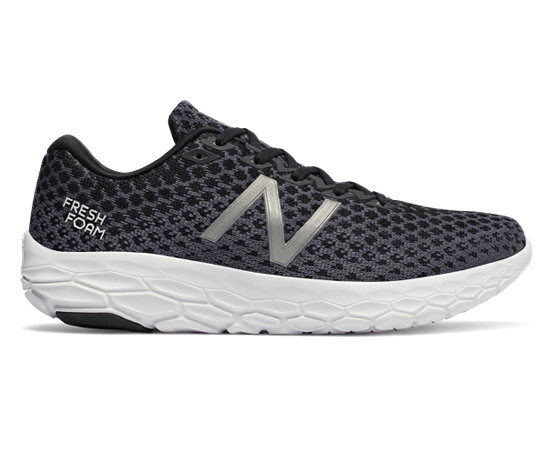